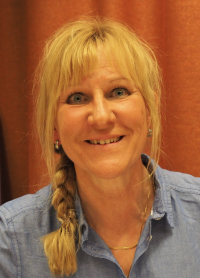 Transition to adulthood in a frightening world, the nursing angle

Eva Lindgren: “Being a 24/7 caregiver and a parent at the same time creates an unbearable burden”

“If I can keep him alive until he is thirty, he will survive.” This statement was made by a parent of a 27-year-old patient with mental health problems during one of the research interviews on transition to adulthood by Dr Eva Lindgren of Luleå University of Technology (Sweden), representing a typical example of prolonged adolescence in western European society.

“The parents usually feel confident that the full transition to adulthood does come to an end at some stage”, Lindgren says. Her most recent study shows that being a parent to a young adult with mental illness in transition to adulthood can be an extremely heavy burden. “For this study I asked all of the parents: how do you manage? All of them started to cry when I asked them that question. All of them. And then they indicated that they had no other option.”

Parent and caregiver
“I am all in favour of the parents being responsible of their children. But they should not be both the caregiver and the parent at the same time. If the burden is heavy, for instance when children have mental disorders, it is no longer a matter of normal parental care. When it comes to giving 24/7 care to a nineteen or twenty year old, this can become an unbearable burden. Too hard for parents to cope with.”
“Apart from the special care, these young people also need their parents to be parents. It is impossible to be a parent and a caregiver all of the time. Professionals should relief the parents from this burden, not from the responsibility. Parents and relatives should be allowed to reach a balance between taking responsibility and letting go during the transition years of their child.”
In her latest paper Lindgren took the family nursing approach, focusing on the improvement of health and wellbeing more than cure. “What would be needed to have these families live a life as normal as possible in spite of the mental health problems of their child? Obviously these adolescents need special care and support.”

Prolonged adolescence
Lindgren: “In other cultures adolescence involves a period of a few years. Girls for example may marry between fifteen and twenty and move out. Different studies show that in our western culture during emerging adulthood, commitments and responsibilities are often delayed while the role experimentation of these young adults continues and may even intensify. It is like being an adult without having the opportunity to live as an adult. During this prolonged period of independence young people with mental health problems often prove to be less able to take care of themselves. These adolescents of 25 or sometimes thirty years old often find themselves in a situation of instability. Handling these old kids for such a long time becomes difficult for the caregivers and the pressure of society asking for so many choices leans hard on them. I saw that these children were very scared of their roadmap: could they take care of themselves, would they have enough money to pay their bills, how certain is their employment? Clearly all of this was very scary to them and they did not know if they wanted to grow up at all.”

Stepping into a frightening world
Lindgren’s study describes how relatives of young adults with mental illness experience the changes in their lives when they undergo the mandatory transfer from child and adolescent to adult care. Some of them said to feel as if they stepped into “a frustrating and frightening world”.
Lindgren: “In Sweden, like in several other European countries, we now have a system where the transfer to adult psychiatry at the age of eighteen is rigid and immediate. Some years ago we benefited from some flexibility: therapists were allowed to finish a treatment or were permitted some overlap to accompany their patients into adult care. This has stopped for economic reasons: the transfer at eighteen is now a hard cut, with negative consequences for both the patients and their families. My research shows what it does do them and – looking at the damage done by unsuccessful transfers – I am sure that the economic argument is not valid.”

Walking a tightrope
“Parents use the metaphor of walking a tightrope for their task of caring for a young adult with mental illness in transition to adulthood”, says Lindgren. “They feel the pressure of needing to be a parent and also to fulfil a range of caregiving tasks on the level that one would expect from a professional psychiatric nurse. At the same time they try to teach the young adult to take responsibility for his or her choices and decisions. They were also balancing on the tight rope in the sense that they were fighting for their rights to receive appropriate care and – from the age of eighteen – to accept that they were excluded from the child and adolescent care system. They felt like being on a tightrope without a safety net: hope for changes and recovery was the lifeline they held on to, in order to survive and keep their kid alive.”

At the shift to the adult system, some young adults and their families were completely overwhelmed by the changes in care. Others had prepared a transition plan, including the establishment of relations with their new professional caregivers in adult psychiatry, but the plan was not carried out. Although Lindgren’s conclusions are based on a qualitative methodology, some of the cases picture a disastrous effect of the western European division between adolescent and adult mental health care. Patients’ medical records from child psychiatry were put aside and left unread by the adult psychiatrist, parents were ignored and promises were broken. Parents were left aside, feeling powerless and obliged to google their own information about the medical condition of their children. However, parents who were no longer informed nor consulted were expected to continue every day parental care, without professional support. Pressure on parental care and family relationships increased and added to their heavy burden of round-the-clock parental care. Relatives felt a growing distrust in mental health professionals and parenthood became a matter of survival –Lindgren titled her doctoral thesis: “It’s all about survival” (2014) and suggests that professional support to relatives in managing their own lives, and seriously considering them as resources could reduce their feeling of powerlessness.

Different worlds
“Adult psychiatry in Sweden appears to have too little understanding and appreciation of the work that is done in child and adolescent care, while the child and adolescent mental health professionals position themselves as the underdog”, according to Lindgren who embraces the suggestion to establish a separate psychiatric category for youth until full adulthood, as voiced by professor Patrick McGorry and others. “Adult and child and adolescent psychiatry are two different worlds. I learned about quite a few mutual assumptions between these worlds that are based on a worrying lack of knowledge. I have the impression that most of the expertise on transition to adulthood is in the heads and hands of youth psychiatrists. Unfortunately they seem to be far to modest to claim this very important field of knowledge.”