Almost 90,000 children without families applied for EU asylum in 2015

Sweden registered 40% of all unaccompanied minors 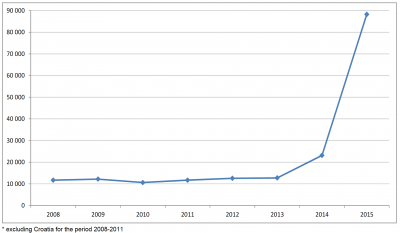 A Norwegian study by Jakobsen et al indicate that about 42% of unaccompanied minors (UM) meet criteria for a psychiatric diagnosis a few months after arrival, particularly PTSD. Similar results have been found in other studies. On a group level the mental health problems seem to persist at follow- up after 1-2 years. To provide accessible, multimodal and culturally sensitive interventions to UM in need, is a challenge for child and adolescent psychiatry, but perhaps even more so for the primary health care and the educational system, where the majority of psychosocial needs are identified and addressed. The challenge is sharpened by the lack of qualified interpreters.
As of today, there is no overarching strategy within child and adolescent psychiatry across the country on how to address the mental health care needs of UM. Locally we see new independent initiatives, e.g. mobile health units reaching out to reception centers for UM, psychoeducation in groups and efforts to increase the competence in delivering trauma-focused CBT.
Many new reception centers for UM, both privately and publicly run, have opened in the last years. The quality of care and staff competence vary substantially. From clinical experience we know that the level of care, both in the reception centers and the school setting, is crucial in preventing stress in the asylum seeking process from developing into mental disorders. In response to this, many child- and adolescent psychiatry clinics have been providing supervision and training on post-traumatic stress for the staff at the reception centers, but more training initiatives are needed.
Also, it is apparent that long periods in the asylum seeking process, or in the waiting with the perspective of being deported at 18 years of age, have a very negative impact- to say the least- on the young persons' health. This is also a consequence of long delays in school start.
In addition to providing high-quality services, mental health professionals also face the challenges of advocating patients’ mental health needs and human rights in a societal climate where diversity is questioned and xenophobia is on the rise. Child and adolescent psychiatry has an important role in strengthening the youths’ self-esteem and highlighting their many contributions to our society.
A European conference on this topic would be timely and very much needed. We also welcome the initiative for joint research.

The Swedish association for Child and Adolescent Psychiatry

Respond to this subject.