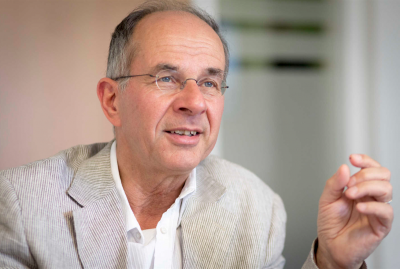 "Battle for a better reputation"

Keynote Madrid 2015 on translational approach for ADHD and ASD

Are ADHD and autism part of the same ‘overarching’ disorder? And if so, could this insight lead to improved therapies? Many practitioners dream to finally leave symptom management by medication and flawed behavioural therapies behind them, and to get a more effective treatment within their reach. Professor Jan K. Buitelaar is one of the world’s most renowned researchers in this field. He will focus his keynote lecture at the ESCAP 2015 Congress in Madrid on ADHD-autism relations.

Buitelaar: “A broader view on developmental disorders could very possibly lead to improved clinical approaches. As we are studying similarities between ADHD and autism for quite a number of years now, we have found cross-disorder characteristics and abnormalities that may indicate that both ADHD and autism are different manifestations of the same disease.”

Better treatment
Nobody would object against a targeted quest for better ADHD treatment. And awaiting science to come up with new, evidence-based solutions is a good thing – although it takes a lot of patience. There is no way around the complexity of attention deficit hyperactivity disorder, nor autism spectrum disorder. Apart from genetic and environmental risk factors, scientists are looking at neuropsychology, brain structure, neurotransmitter systems and – through imaging studies – at the brain function. Overviewing all of these aspects is not an easy job. No wonder that a more practical, translational approach comes to the minds of a growing number of researchers.

“We need better ADHD treatment”, says Buitelaar. “Let us be opportunist and face our every day dilemmas. We have to deal with political and social prejudice. Even when it is hard to swallow, such as our alleged over-diagnoses of ADHD that may well represent a very correct number of patients, including a significant number of prenatally caused cases that some years ago would never have lived to experience their disorder. Not very rewarding for the excellent progress of prenatal and clinical birth care…”

Landmark paper
Professor Buitelaar has been researching the connection between ADHD and autism for more than ten years now and continued to do so. A recent landmark was the paper published in Child and Adolescent Psychiatry, the journal of the American Academy (JAACAP): ‘Are Autism Spectrum Disorder and Attention-Deficit/Hyperactivity Disorder Different Manifestations of One Overarching Disorder? Cognitive and Symptom Evidence From a Clinical and Population-Based Sample’ (November 2012). Van der Meer et al. found that overlapping cognitive deficits may further unravel the shared underpinnings of autism spectrum disorder and ADHD. The paper distinguishes subtypes of ASD and ADHD that “will most likely benefit from different clinical approaches.”

Overarching ADHD and ASD
Buitelaar: “With this study we found evidence that there is one continuum between ASD and ADHD, in which regulation of emotion is a highly important common factor. Our study examined whether different ASD-ADHD symptom classes exist and whether their overlap or distinctiveness gave support for the overarching disorder hypothesis. If the gradient overarching disorder hypothesis is accurate, our findings identify at least one ADHD class with no or only minor ASD symptoms and no ASD class without ADHD symptoms. We found, as hypothesized, that no class with exclusive ASD symptoms was revealed – all children who expressed ASD behavior also presented the less severe precursor of ADHD behavior. This finding is in accordance with the higher prevalence of children with ASD who meet criteria for ADHD, compared to the ASD rate in children with ADHD. These data are also in line with known studies addressing ASD symptoms in children with ADHD.”

Eunethydis guidelines
“Today we are able to help this dysregulation of attention, cognitive control and emotion with very powerful medication – the so-called psychostimulants. We know enough about these medications to declare them safe for long term use.” Still, a recent expert debate at the Eunethydis discussed the recommendation from authoritative ADHD guidelines by NICE and the European ADHD Guidelines Group that parent training should take precedence over medication as first treatment in most cases. Buitelaar argued against that, saying that “the comparison between behavioural therapy and medication, as it was presented in this debate, was over-simplified. Proponents overlooked for example that parental training and other behavioural interventions may also have unwanted side effects. If a patient at some stage refuses to take part in education or some kind of token-economy system, it may well bring damage to the patient and result in a situation that is much less treatable. So my position in this debate was that medication should be the first treatment, unless parents or the patient prefer a psychological treatment. Because forced treatment obviously leads us nowhere.”

Medication first
“Medication should come first, because it clearly has the strongest and most direct effect. In other words: why would any doctor not offer the best treatment first? To a patient with pneumonia we don’t say ‘let’s first try respiration exercises’ either, when antibiotics are safe and available. I have clearly argued there and then that medication is not curative, but efficient for the reduction of symptoms. And that the effectiveness of behavioural therapies are strongly overestimated. Most reports on behavioural therapy are based on non-blinded monitoring – parents know that their child received the therapy – which is incomparable with state of the art medication studies that are based on double-blind controlled trials. Even side-effects are in the open, but – as I said – I’ve never seen a proper study yet on the side-effects of behavioural therapy.”

“The paradox is: we have strong and effective medication. We know that the present medication could offer long-term effectiveness. But we are not at all certain that medication has a curative effect. This is why I feel we are obliged to look for another treatment model. Comparable to the diabetes-insulin model, we keep the patient going on medication knowing that we don’t cure. That is not good enough. We meet the challenge to find ways that have a deeper effect on the mechanisms of the disorder. Our research should go in that direction.”

Refining research
“The broader view – does an overarching disorder exist? – is one of the first steps that may lead to more sophisticated therapies. We have been experimenting with neurofeedback, working memory training, mindfulness, and we are still researching the effects of nutrition and so on. How is ADHD caused in premature births and how may we prevent brain damage in those babies? These are the matters we need to invest in.”

“We have the – rather basic – knowledge that abuse and neglect have an effect on all psychiatric disorders. Well, I would like to know a lot more about risk factors: more specific, more refined and better connected to different disorders. I like to promote the so-called public health implication. Helping as many patients as possible in the most effective way. Many have criticized fluorination of tap water some thirty years ago, but the fact is that modern youth have much better teeth than I have… I respect the nuances of these public debates, but effective treatment is what I am looking for. That is the bottom line.”

Politics
Buitelaar’s strive for an adaptable line of research – the translational approach – goes along with a clear political statement. “I keep on saying that society pays too little attention to the long term perspective. Politicians have a time span of no longer than two years to really execute their policies. After that, they have either resigned or they are occupied with the next elections. This is way to short for science to come up with an output on which governments could build a substantiated policy. No wonder that completely unscientific ideas – the alleged voter’s sentiments – often lead to unwanted measures that go against the patient’s interest. It weren’t the doctors that decided that ADHD is being over-diagnosed nor that the patients are over-medicated. But everyone seems to believe these fairy tales. The previous Dutch government even published an official letter declaring demedicalization as their mission. And it still is. This line of policy is based on no evidence at all and it denies the effective therapies that we have developed. I believe this goes much too far and it is harmful to the children we have in treatment.”

Cornered
“Child and adolescent psychiatry and especially ADHD treatment seems to be cornered into a very defensive position. We have neither standing, nor authority in politician’s perceptions. Some of my colleagues are fighting an unequal battle to improve this reputation. I appreciate very much that experts stand up for our profession, but lone rangers won’t turn this around. National and international bodies like ESCAP could surely play a role in changing this trend. We are very good at organizing our knowledge; now we should do the same in policy development and reputation management. Let’s organize this strategically because these well-respected individual experts will never win this battle on their own. Where is our public affairs representative in Brussels? To me it is a necessity to have such a professional working on the representation of the interests of children with serious mental health problems. We need an antenna in Europe, a spin doctor if you like, someone who is very good at convincing politicians. This lack of representation is only one example that goes to show that we are behind in policy development and organizing our public strategies. To me it seems obvious that a society like ESCAP will take initiatives to join forces on a European level, as the member societies do on their national playing fields.”

ADHD, autism spectrum disorders and antisocial behavior in children shape the research terrain of Jan Buitelaar. With over thirty years of experience and a highly interdisciplinary approach, he makes an important contribution to the study of developmental disorders in children and adolescents.

Professor Buitelaar’s research mainly focuses on the coherence between disorders (such as ADHD, autism and aggression) and the operation of the brains. He investigates genetic and environmental factors that may influence these disorders, in order to find new methods of diagnostics and treatment. Buitelaar tries to direct his research work in an applicable direction – ‘translational research’ in his words – aiming for clinical results, and tends to integrate clinical studies with behavioural research, neuroimaging, genetic and pharmacological studies. His examination of the changes that precede the development of autism – along with cognitive psychologists a the University of Nijmegen and in close cooperation with universities in Utrecht, London and Stockholm – is just one example.

Brain Database
The Psychiatric Brain Tissue Program is an ambitious project initiated by professor Buitelaar in 2013 that intends to build a unique brain database for neuropsychological disorders. This project asks patients to donate their brains for research after death. Radboud University concentrates on ADHD and autism, other universities collect brains of patients with five other disorders. Apart from all the information that was already available through brain scans, Dr Buitelaar wants to add anatomical details of the brain structure. ‘Does someone with autism, for example, have more or fewer synapses, or specific types of proteins in abundance?’ and answers to similar questions may soon be found due to this project.

Guidelines and protocols
In the European ADHD Guidelines Group and a range of other European policy and research partnerships, Jan Buitelaar is a very actively involved in improving the quality of child and adolescent psychiatric diagnostics and treatment. One step beyond guidelines, the national knowledge centre that he chairs ceaselessly shows up in the top-three of European institutes to develop uniform protocols for diagnostics and treatment of children and adolescents.