A mother who witnessed how her two-year-old child was executed by IS warriors. Very young victims of sexual violence. One of them, an eight-year-old girl, was sold as a slave already more than ten times. Jasmine, a sixteen-year-old girl set fire to herself to become “so ugly, they will not rape me again.” The impact of trauma and terror sometimes obtains unimaginable dimensions. Professor Jan Ilhan Kizilhan psychologist and trauma expert at the University of Baden-Württemberg (Germany) has examined the worst cases of Islamic State – IS – victims. 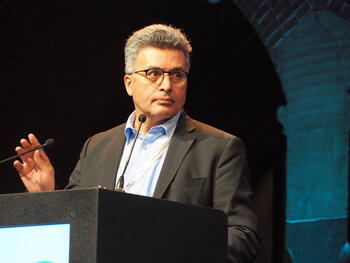 Professor Kizilhan speaks with enormous respect about the power of Yazidi women, “who actually have no reason to live, but are still fighting” and meanwhile, being from Yazidi origin himself, he does not always hide his cynicism and says: “With all the horror they have been through, they do have one 'advantage': their ancestors had to deal with trauma before them. Currently, they are experiencing their 74th genocide, after barely having survived the Ottoman empire. They were collectively prepared for this to happen, so they have developed a special kind of hereditary resilience.”

IFP World Congress
Kizilhan performed a keynote lecture on the opening day of the 2018 IFP World Congress of Psychotherapy in Amsterdam (7–9 June). The scale and extremity of the acts against Kizilhans patients, made his audience listen silently, with bated breath. The 1,100 women and children who are in treatment now in Baden-Württemberg, suffer from three dimensions of trauma: individually, collectively and over a long period of time. Kizilhan studied and treated IS victims in Northern Iraq and founded the Institute for Psychotherapy and Psychotraumatology at the University of Duhok. To fully understand the tragedy, he also investigated the psychology of the perpetrators and published ‘Die Psychology des IS’ in 2016. That same year, Kizilhan received the International Women’s Rights Award at the 8th Geneva Summit for Human Rights and Democracy, for his work on repairing the shattered lives of countless Yezidi women.
Kizilhan: “As psychotherapists, we must understand the reasons behind this fanatic aggression. The dehumanization from which these crimes take place together with the group pressure and anxiety that leave no choice to these IS militants.” A preview from a BBC documentary showed a poignant contrast between the heart-breaking victims’ statements, and the unemotional small-talk between IS militants about buying and selling Yezidi sex slaves.

What would happen to you?
“What would you do, how would you feel?”, was professor Kizilhan’s opening question to his international audience in Amsterdam. “Make it a personal issue: one day you may meet an overwhelming caseload, as it happened to me in northern Iraq. What would happen to you as a person? A psychotherapist should live through that, before being able to actually help the victims.”

Kizilhan strongly emphasized on understanding and empathy, saying that a psychotherapist “should not be confined to his treatment room. To understand what is happening in the outside world, a therapist should move around in that same world.” Like a wake-up call he took away the last illusions of a room full of mental health professionals and said that “people can kill, so they will kill” and “there will not always be a happy end to these cases.” On the other side, he said, “are so many strong people who will fight for getting their lives back”, referring to the women in Baden-Württemberg who seem to benefit from his transcultural psychotrauma therapy and survive their transgenerational and historical trauma. “The cumulative and collective nature of these traumas, as well as the cultural aspects make it hard to connect to these patients.” Shame and ancient religious rules may impede the therapy, but collaboration with religious leaders and making some of the rituals part of the therapy seem creative ways to break the deadlock. Still, even in these extreme cases, “the patient-therapist relationship and real honesty are the main elements to reach a liveable solution for these victims”, says Jan Kizilhan.