Good tradition in a new format: the Madrid workshop 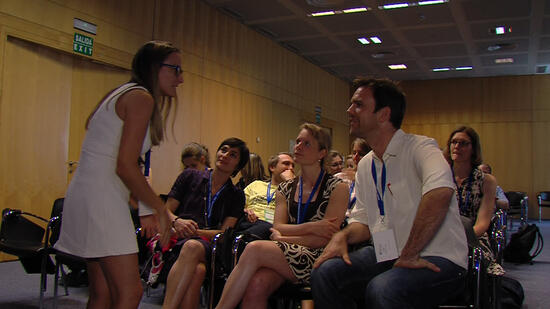 The Madrid workshop was organized by a group of committed junior researchers Lizanne Schweren (Groningen, The Netherlands) Susanne Mudra (Hamburg, Germany), Ida Wessing (Münster, Germany) and Jochen Seitz (Aachen, Germany) for fourty talented young researchers from nineteen different European countries. It was initiated and sponsored by senior researchers professor Johannes Hebebrand (Duisburg-Essen, Germany), editor in chief of ESCAP’s official journal European Child and Adolescent Psychiatry (ECAP) and professor Stephan Eliez, (Geneva, Switzerland), ESCAP’s president-elect. In doing so, these junior and senior researchers revived a tradition of research seminars taking place at a European level going back to one of the founding fathers of biological research in child and adolescent psychiatry, Helmut Remschmidt from Marburg, Germany, from the turn of the last century.

Special focus: grant writing
The rebirth of this Research Academy was in concert with the theme of the 16th ESCAP Congress: « From Research to Clinical Practice. LINKING THE EXPERTISE ». The Academy started with a three-day workshop which preceded the beginning of the official ESCAP Congress, and was pursued during the Congress. Its contents covered overarching scientific topics as well as individual feedback on current research projects with a special focus on grant writing. It was composed of senior researcher’s input talks, panel discussions, peer-to-peer intervision sessions and interactive workshops focusing on potential joint grant writing.

Input talks
Senior researchers’ input talks by Dr Kent Hung (Münster, Germany) and professor Christoph Correll (New York, USA) set the stage for the special focus of this year’s ESCAP Research Academy workshop: grant writing. They gave a good overview over available grants at a European level and hands-on advice for composing a grant. Henk Linse (Amsterdam, Netherlands) shared with the participants his experience in communication strategy to develop a strong and compelling personal communication plan and in building sustainable professional relations and networks. Professor Bruno Fallissard (Paris, France) added a concise overview about statistics in the field of child and adolescent psychiatry – which is at the heart of every grant proposal and paper.

Interactive workshops
Following these inspiring and application-oriented senior input talks concerning grant proposal writing participants engaged in interactive workshops by the participants. Here the young researchers found like-minded colleagues in several iterative creative steps to form small groups and identify joint questions pertaining to such different research fields as « ADHD », « early psychosis », « early infant development » and « training for child and adolescent psychiatry specialists ». This format enabled participants to apply the previously gained knowledge and practice exemplary grant writing – however on topics, that were of personal interest to them – creating new possibilities for a later follow-up and realization. One of the highlights of the workshop was the presentation of these grant writing ideas to the entire group and professor Munir (Boston, USA) for critical appraisal and feedback.

Peer-to-peer feedback
Another core element of the ESCAP Research Academy were the peer-to-peer feedback sessions on a current project (paper or grant proposal in progress).  Small groups of four to six participants were formed according to joined research topics beforehand. Each junior researcher had sent in his or her work two weeks prior, read the work of their colleagues and prepared precise feedback. Then, on site, the groups met in four intense sessions to discuss and share this feedback on each participant’s paper or grant. The result was an unusually high intensity of scrutiny by fellow researchers of about the same point in their careers, which was found extremely valuable by the authors-to-be.

Work-life balance
However, one of the prominent questions of today’s (and maybe not only today’s) researchers is how to combine a life in research with other demands like clinical work and private/family life. This was addressed in a panel discussion featuring professor Carmen Moreno (Madrid, Spain), Dr Joost Janssen (Madrid, Spain), Ms Maude Schneider (Geneva, Switzerland) and Jochen Seitz (Aachen, Germany) who tried to shed light on the different demands, constraints, but also possibilities of enriching a researcher’s life by clinical experience and family life. The lively discussion that followed (about thirty per cent of the participants already had children) showed, how different the conditions to arrange ones work-life-balance are in the participant´s nineteen countries of origin. For example: paid leave after having a child varies from more than one year in Germany, Scandinavia and some eastern European countries to only four months in most other countries.

Prominent speakers
During the last part the ESCAP Research Academy was continued in parallel to the ESCAP Congress and many prominent speakers found time to present their work and personal research career path to the junior researchers. Professor Hebebrand shared his fascination about the underlying core phenotype of anorexia nervosa including its symptom based classification in DSM-5 and the importance of asking critical questions. Professor Eliez summarized his excellent work on learning from children with deletion 22q11 about early development of psychosis and how he set up a longitudinal research team. He was seconded by two achieved upcoming researchers of his group, Ms Maude Schneider and Ms Marie Schaer, who added their PhD perspective and how to best time and sequence your work for building a scientific career. Professor Guilherme Polanczyk (Sao Paulo, Brazil) presented cutting edge ADHD research by challenging the established criteria of childhood onset in this disease, a good example on how to motivate young researchers to look beyond current boundaries. Finally Kathya Rubia (London, UK) expanded on her keynote lecture for the congress by explaining astonishing fMRI-neurofeedback results on adolescents with ADHD, thereby encouraging also unconventional clinical applications

Unique opportunity
For the forty young researchers who had been selected, the Academy represented a unique opportunity to exchange experiences among peers, create strong connections, meet and discuss with senior researchers face-to-face and potentially initiate future research projects at a European level. Actually, several grant proposals were elaborated during the Academy and one first European research project will address professional training in child and adolescent psychiatry in the participants’ different European countries of origin.

Special thanks goes to Professors Hebebrand and Eliez for making this first workshop of the ESCAP Research Academy possible. The organizers would also like to thank the chair of the local organizing committee professor Josefina Castro-Fornieles and her team for arranging rooms for the pre-congress workshop at the Hospital Gregorio Maranon, for integrating the later sessions in parallel to the ESCAP Congress and for all her organizational support. Furthermore, great thanks goes to Henk Linse, not only for being an excellent speaker, but also for setting up the ESCAP Research Academy website and ensuring a continually high professional level of communication. And we owe a final special thanks to Alexis Revet, member of the upcoming organizing committee.

To be continued
The next step will be to perpetuate this initiative and to keep it sustainable by organizing at least annual meetings of the ESCAP Research Academy. Young investigators who wish to participate in the Academy can contact the organizing team of this year’s and next year’s ESCAP Research Academy at the following address: research-academy@escap.eu.

Young investigators at their 2015 workshop in Madrid.