The ESCAP Research Academy provides unique and accessible learning opportunities for ambitious researchers in child and adolescent psychiatry. This initiative holds some history, mostly leaning on the presumption that a large international network of child psychiatrists should share and transfer its valuable knowledge to a next generation. But is has never been as vivid and promising as today, in the hands of professor Johannes Hebebrand (Duisburg-Essen) and supported by ESCAP’s president-elect, professor Stephan Eliez (Geneva).

A small team of researchers took the lead and proved that the ESCAP Research Academy is alive. They formed an organizing committee and set up the three day Madrid Workshop, ahead of the ESCAP Congress in June 2015. Some forty young and ambitious researchers joined the workshop to be immersed in the richness of knowledge that was available at the ESCAP 2015 conference. The Academy Workshop was fully booked.

Knowledge
This organizing committee, along with a larger group of young researchers, got together some time ago after an exchange of ideas with Eliez, Hebebrand and ESCAP president Ruud Minderaa. They organized a successful workshop that gave them a good opportunity to learn from each other and from the experts in the field about grant and paper writing, to discuss ongoing research projects and challenges and to get involved in the ESCAP Research Academy, then still in formation. “It was in my own personal interest to re-establish the Academy”, professor Hebebrand said from his position as the editor-in-chief of ECAP, the official ESCAP scientific journal. But meanwhile he found himself feeding a group of knowledge-hungry investigators with an enthusiasm he could not resist. Professor Stephan Eliez – president-elect of ESCAP – is a strong advocate of the Research Academy initiative. He comments: "The ESCAP Research Ademy is a key project for our research branch. Indeed it allows young researchers from various European countries to meet, get a chance to know each other and take advantage of expertise in different research domains from leading scientists throughout Europe. The Research Academy also allows young researchers to establish contacts with research groups where they can then consider pursuing their research carrier." Eliez says this initiative also "establishes ESCAP as a key player in favouring an European research network. It encourages young researchers to present their work and preliminary results at ESCAP meetings." 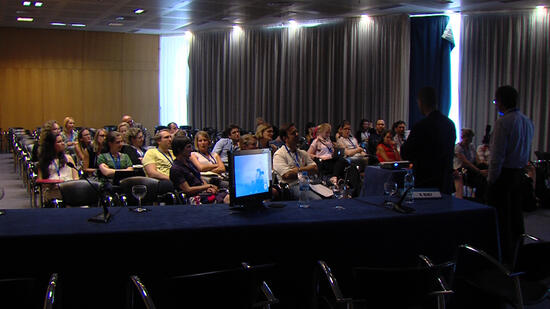 The group of young researchers in Madrid at a lecture by Hebebrand and Eliez.

Clear direction
The young investigators, as they were named at that stage, knew what they wanted and defined their goals. ‘Relevant scientific topics’ was first priority: they wanted to expand their knowledge, dig into methodological issues and refine their presentation skills. And they had some ideas about how to get there as well: meet the seniors and listen to exemplary career trajectories, for example, career counseling and networking. Among themselves they were eager to share work in progress, discuss paper-drafts in small groups, peer-intervision.
Topics to investigate were suggested, such as design and execution of cohort studies with a focus on mental development, age-specific variations, the influence of puberty status and many more. The young researchers wanted to aim at identifying research with a clinical focus and were interested to interview clinical stakeholders (patients, relatives, clinicians).

Meeting the seniors
Organizing a workshop meeting prior to the International ESCAP Congress became one of the priority activities, which included meeting the seniors, inviting participants from low-income countries and interactive, online conferences. The Academy’s launch of the Madrid Workshop has put the young investigators on the map of child and adolescent psychiatry research. More researchers in their early career phase may apply for being part of the next steps in the development of this ESCAP network.